Off Season, the title of James Sturm’s latest comic, refers to New England in winter, as experienced on a trip that the main character, Mark, newly separated from his wife, Lisa, takes with their kids to Maine one blustery November weekend. It’s off season: most of the stores and restaurants are closed; the beach is freezing; the kids hungry and restive. The only place open is a 7-11. Walking past an art gallery, Mark remembers that he and Lisa bought a painting there in happier days. He was shocked, and pleased, to find himself becoming the kind of guy who buys art. But now he wonders if that decision was all Lisa’s. He imagines coming back to the seaside town in the summer, to find out what he really wants. Maybe he is a guy who buys art.

Not that he can afford any. Lisa has, as he sourly puts it, “the house, the rich parents, and plenty of time to volunteer for ol’ crooked Hillary” (he supported Bernie). Mark, a contractor who can fix anything, has had to sell his truck, which means that instead of being independent, he now works for a shady guy named Mick, a Bernie Bro with a BMW who does good work when he gets around to it, but gives Mark the runaround, writes bad checks, and eventually spreads lies about him. We don’t know enough about Mick to say for sure, he’s probably a shit all the time, but Mark’s hard time, at least, is an aberration from the life he thought he had been living. 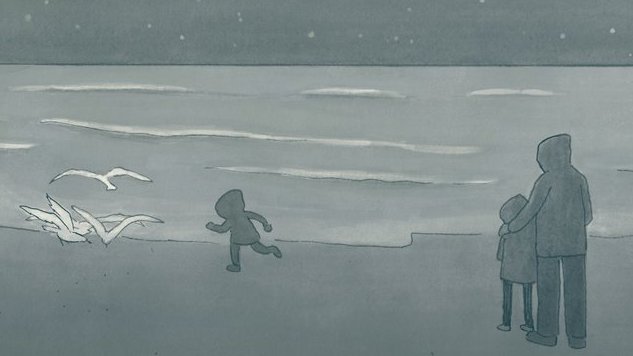 Which brings us to the second meaning of Sturm’s title.  Not the off-season, but an off-season. A spell of bad luck and despair that can happen to anyone, anytime. And not just anyone: even countries can have off seasons. Mark’s trip with his kids to the shore doesn’t happen in any old November. It’s November 2016. Trump, seen only once in the book, haunts the book: his oleaginous, bullying, smug, thoughtless bluster seems at once a threat to some basic American decency and a confirmation that the very idea of decency was a fantasy, told by a few for a few. (We can’t just console ourselves by thinking that Trump and the selfishness and hatred he’s emboldened is an aberration.)

Sturm draws Trump as a piggy-faced dog–everyone in the book is a dog. Or a person-dog. Sturm’s choice nods to Art Spiegelman’s Maus, where the characters are humanoid animals, one for each ethnic or national group. The use of animals in place of people will always prompt questions of empathy and identification—and those are important questions to ask in a time when difference is even more demonized than usual. (Sturm alludes to the issue in a chapter showing how Mark and Lisa met: they worked backstage at a summer theater on the Cape, helping with a production of Orwell’s 1984 in which the actors wore masks: from off-screen, as it were, we hear the director and actors participating in a Q & A with the audience: “Using animals as human stand-ins is as old as storytelling…” one says; another asserts, “As an actor, it’s liberating to wear the mask.” Here Sturm at once acknowledges and ironizes what he’s up to.) But where Spiegelman’s conceit is tied to the world view of his father, a Holocaust survivor, Sturm’s feels less subjective. That is, the dogs don’t symbolize Mark’s views. It’s pretty amazing how much variety Sturm gets from his dog characters, and if I knew my breeds as well as my daughter does I could hazard some connections between how the characters look and what they’re like. But that would be to miss the point. The book isn’t schematic—most of these dogs aren’t pure breeds, I don’t think, they’re mutts.

Off Season is unhappy about American politics. But it has nicer, and more nuanced, things to say about Americans. This comes up in its depiction of parenting, which might be its real subject. (Perhaps the idea is that Trump’s America is an unruly, even monstrous child, and good-enough—sympathetic but firm—parenting is what it needs.) The book is filled with parents trying to do their best, and mostly but of course not always succeeding. Mark and Lisa try hard not to take out their marital problems on their kids, though they sometimes fight through them. The best parent in the book is a minor character named Kirsten, the mother of a friend of Mark and Lisa’s son, and who, it is intimated, voted for Trump. In a memorable chapter, Mark and his daughter drive through a blizzard to pick the boy up from his friend’s house. The car spins off the road: they are unhurt but by the time they’ve trudged through the snow to the shelter of the house they’re cold and wet. Mark spends an enjoyable evening playing board games and eating chili with Kirsten and the various neighbourhood children who’ve gathered at her house, while he waits for her boyfriend to get home from work.

Barry gets Mark out of the ditch: when Mark thanks him, he replies, “Thank Jesus. He has our backs whether we know it or not.” That feels a little much (it’s not a totally implausible response, but in my experience people who think like this are usually more circumspect when first meeting someone—they will, however, say “Have a blessed day” to you all the time), but the point, maybe not subtle but also not wrong, is that we shouldn’t reduce people to their political convictions or opinions, shouldn’t be so quick to pigeon hole them. Maybe Mark is, after all, both a builder and an art lover. What would be so weird about that? (Or maybe the point is that we should consider the material and social conditions that allow people to live in cognitive dissonance: generous to individuals, even ones they don’t know, but hostile to groups. Or, maybe, hostile to individuals who don’t look like them.)

Apparently Sturm first published the book serially online in the wake of the 2016 election. But his concerns here aren’t only topical; he’s been thinking about them for a while. Sturm wrote one of my favourite comics, Market Day, set in the Pale of Settlement in the early 20th century, I. B. Singer, Sholem Aleichem territory, but shorn of anything folksy or sentimental. Its Yiddishkeit is as somber as Sturm’s palette—and as moving. I disagree with the Times reviewer who finds Off Season more vibrant than his earlier books because, unlike them, it’s set in the present. That’s a spurious distinction. It’s been several years since I read Market Day, so I may be misremembering, but both it and Off Season want us to think about how people—men, really: Sturm isn’t bad with women, but they are never center stage in his books—can make a living in economies that don’t value them. (Market Day is about a rug maker who can’t sell his work anymore; machine-made rugs cost a lot less.) In both books, the main characters respond to their precarity with violence, directed at others and at themselves. When Mark loses his cool, he doesn’t hurt anyone (at least not directly) but his response (he vandalizes the house he’s been building with Mitch) is disturbing. My criticism of Sturm is that he’s not sure what to make of violence. Is it an understandable, if regrettable, response to an intolerable situation? An intolerable response? Secretly exciting and laudable?

Off Season ends in oblique, low-key optimism. Which is maybe the best we can hope for right now. It’s a beautiful, pensive, involving work: you can read it in an hour but you’ll want to linger longer. My only wish is that in his next book Sturm thought a little more about violence, frustration, anxiety, loathing, all kinds of bad affects. Are they what’s off this season? Or are they with us all the year long?

2 thoughts on “Wearing the Mask: James Sturm’s Off Season”