Mr. and Mrs. Copperfield had gone over to Panama City for two days. The first day after lunch Mr. Copperfield proposed a walk towards the outskirts of the city. It was the first thing he always did when he arrived in a new place. Mrs. Copperfield hated to know what was around her, because it always turned out to be even stranger than she had feared.

Coming to Jane Bowles’s only novel, Two Serious Ladies, I didn’t fear it would be strange. But I certainly found it to be strange. I don’t think Bowles intended this passage, which for me centers on that comparative adjective “even stranger,” as a description of her novel, any more than Mrs. Copperfield is an advertisement for ignorance. It doesn’t take us long, after all, to see that Mr, Copperfield, like all the men in this novel, is caught up in his own brutish self-righteousness. His spirit of adventure is a lot less interesting than he thinks it is. It’s not that the novel is advocating being afraid, only that it admits that for women, even wealthy and eccentric women like the ladies of the title, there’s quite a lot to be afraid of, mostly men and their violence and neediness. Mrs. Copperfield, in other words, is much shrewder than almost anyone gives her credit for.

The Serious Ladies of the title are Christina Goering—impossible, in a novel published in 1943, not to hear an ominous echo of fanaticism in that name—and Frieda Copperfield. They know each other slightly, and near the beginning of the novel even meet at a party in New York. Mrs. Copperfield is about to leave on the trip to Panama referenced in the passage I’ve quoted above. Miss Goering has just taken on a female companion, a Miss Gamelon, who she will eventually be quite mean to. Goering and Copperfield run into each other again at the end of the book, but one of the things I liked about it is that it doesn’t spend much time making parallels between them, beginning with its narrative structure, which quite favours Goering’s story over Copperfield’s. I found that a pity, since I much preferred Mrs. Copperfield to Miss Goering, but I appreciated the (at least apparent but actually I think quite sincere) casualness, even haphazardness of the book’s structure.

I confess I’ve never actually understood what a picaresque novel (technically a solecism, I suppose—a picaresque isn’t a novel, it’s another literary form altogether, right?) but I think the term applies here. It really was never clear to me why characters did the things they did, this despite but perhaps ultimately in keeping with Miss Goering’s claim that something she is about to do “is against my code, but then, I have never even begun to use my code, although I judge everything by it.” There’s the sense here of a moral imperative, however inchoate, a desire to push established ways of behaving to a limit. Taken out of context, Goering’s comment about the code she never uses but judges everything by sounds a little arch, like something from Wilde. But the book isn’t arch at all. In fact, I’m not quite sure how to get a handle on its tone., and in the end that might be the thing that bothers me the most about it.

Miss Goering takes up with one man after another, each worse to her than the last, and leaves the city for increasingly precarious and transitory living situations. Mrs. Copperfield abandons her husband to live in a Panamanian brothel, befriending its alcoholic owner, Mrs. Quill, and one of the prostitutes who live there, Pacifica. In the loveliest scene in the book, Pacifica takes Mrs. Copperfield to an isolated beach where she tries to teach the terrified older woman how to swim. It’s an idyll of sorts in a book that doesn’t hold much truck with anything that gentle, though it’s also a sad scene, foreshadowing the falling out between the two women by the end of the book. 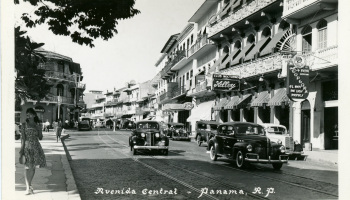 Two Serious Ladies quite bedeviled me. I’ve written before about the risks of thinking of books as sui generis. What that often means is that we haven’t valued their context highly enough. But even though neglected Anglophone women writers of the 20th Century are my bread and butter, as it were, nothing I knew helped me to categorize Bowles’s novel. So many of the writers I love—Jean Rhys, Barbara Comyns, Rebecca West, Penelope Fitzgerald—would seem to be close kin to Bowles. But I didn’t find that to be the case. Maybe it matters that Bowles was American and the others weren’t. I did compare her fleetingly to Kay Boyle, but the comparison is mostly to Bowles’s credit. She seems both more viscerally clear about the dangers of authoritarianism than Boyle (it took her a while to come around) and less obviously in thrall to an aesthetic of high modernist seriousness. As I think about it now, Bowles strikes me as much less invested in a tradition of literary realism than those other writers, even though they all, in their different ways, contested it, mostly by having recourse to the Gothic tradition that has always been the doppelganger of English-language realism. Bowles is doing something else, but I can’t figure out what. It matters a lot, I think, that unlike the women in Rhys and Comyns’s novels, especially, money insulates them from the patriarchy’s harshest depredations. Goering and Copperfield can be more overtly in control over their own lives than the protagonists of those other writers’ books. But just because they’re financially independent doesn’t mean they know who they are.

The longer I blog—and WordPress tells me it is exactly two years ago today, in fact—the more I’m convinced that I only really care to write about things I really like. And so I’m a bit hamstrung by Two Serious Ladies. If I hadn’t agreed to participate in Dolce Bellezza’s readalong I probably wouldn’t have written about it. And even then I don’t know if I would have had I not read Seraillon’s wonderful & intelligent piece.

It’s always a pleasure to read criticism where the subject clearly resonates with the critic. Although Scott’s post confirmed for me that Two Serious Ladies didn’t speak to me in that way, it also opened up the possibility that I might change my mind. Frankly, it’s unlikely I’ll read this book again anytime soon, but because of the carefulness of his reading I can imagine wanting to do so. All of which is to say, read his post, and those of the others taking part in the group. If you’re like me, you’ll be amazed and grateful that thanks to the glorious strangeness of the Internet you can always find someone out there who has understood something more richly than you have.