The Flight of the Falcon (1965) comes late in Daphne Du Maurier’s career. After it, she published only two further novels (the next one, The House on the Strand, is excellent; the final one, Rule Britannia, quite interesting). Like The House on the Strand, The Flight of the Falcon challenges the dangerous fantasy of recreating the past. It is a novel much preoccupied by generations—the narrator, Armino Fabbio, is 32, but he thinks of the students he spends time with almost as a separate species. He’s right, though, because he experienced the war, even if as a child, whereas they did not.

As a result of his upbringing—after the death of his father, his mother took up first with a German and then an American officer—Fabbio is fluent in several languages, knowledge he puts to good use in his job as a tour guide (though the novel prefers the more obviously hermeneutic term “courier,” reminding us of his role as a go-between). Fabbio spends his days shepherding mostly Anglo-American tourists across Italy, making the same jokes, answering the same questions, jollying along the same grumpy men and excitable women. In just a few deft pages, Du Maurier sketches the toll this life takes. Fabbio is a man stretched thin: hunting down lost packages and making nice-nice to exhausted Americans has brought him to the unstated but palpable edge of despair.

And it doesn’t take long for his life to go astray. A homeless woman who reminds Fabbio of his childhood nurse is found murdered down the street from the hotel where he and his charges are staying. His uncanny encounters with the woman—he pressed a 10,000 Lira note into her sleeping hand only to find her dead in the morning—prompts him to abandon his post and return to his hometown of Ruffano for the first time since leaving it in the backseat of a Nazi officer’s jeep. (Ruffano is made up; apparently it is closely modelled on Urbino; I must not remember much of my visit there, since I recognized nothing.)

Fabbio finds Ruffano dominated its expanding university—in fact, his childhood home now belongs to the Rector. (I was fascinated—and made more than a little melancholy—by the novel’s depiction of higher education in growth mode—people fight over how to use resources, as they do at all colleges and in all campus novels, but in this case the resources are growing instead of dwindling to nothing.) Fabbio also finds Aldo, the charismatic Director of the Art’s Council, who each year organizes an elaborate recreation of some aspect of Ruffano’s past. Aldo, a cod-Nietzschean Fabbio can’t help but be attracted to (for reasons connected to his past), has devised a plan in which he pits the traditional (but already declining in numbers) Humanities students against the arriviste (but dominant in numbers) Commerce and Economics students in a plan to re-stage the five-hundred-year old uprising of the townspeople against the capricious and mandarin Duke who was known to all as the Falcon. Aldo wants to repair the Falcon’s image, but mostly he wants to stage trouble just because he can. “‘I’m here to bring trouble and discord,’” he tells the younger man, “ ‘to set one man against the other, to bring all the violence and hypocrisy and envy and lust out into the open.’”

If this sounds ludicrous, that’s because it almost is, but Du Maurier pretty much pulls it off. In particular, her characterization of Aldo is effective: we see that his amorality is wrong but we also see how students might respond to it. And we are made to thrill, against ourselves, to the real violence that the pretend battles incite. (If you liked The Secret History you might give Falcon a try.) What runs beneath Aldo’s plan—and the novel as a whole—is his desire to return to a glorious Italy untainted by fascism, though that effort comes to seem just as fascistic as the inglorious past. Aldo was shot down by the Allies and then joined the Partisans—an ideological shiftiness that runs throughout the book. Aldo seems more upset that the Germans took over the country than that Italy was fighting alongside them.

The novel’s national-political-social aspect, its preoccupation with how the present (especially an economically ascendant present: the novel is filled with the roar of Vespas) ignores the past (especially unpleasant and hardscrabble ones), is accompanied by a psychological-personal plot. For even as Fabbio becomes enmeshed in the politics of Ruffano, he is trying to find out who killed his old nurse, Marta, and why—for the murdered woman in Rome didn’t just look like his beloved servant. The time of capitalism—even in the midst of les trente glorieuse—is always out of joint; so too is the time of Fabbio’s fractured family. In retrospect, the obstreperous banality of the opening line—“We were right on time,” a reference to the tour bus’s punctual arrival in Rome—is in fact meaningful, and ominously so. To be right on time is to be at the risk of madness—whether from the death-by-a-thousand-cuts of the work of making possible other people’s leisure or from the megalomania of the dream of bringing the past into the present.

When the present seems either banal or tawdry, the past might seem enticing. That might explain why the past holds such a pull on the characters: early on, Fabbio dreams of his childhood and experiences release: “sleeping, I had been a traveler in time, no longer a courier.” Later sleep evades him as a thousand images run through his mind, people from the past and present blurring together: “Too many faces, too many passing strangers, too many hotel bedrooms, hired apartments; none of them mine, nothing I called home.” On the day of the Festival he relishes how the present has been replaced by a vivid, even virile past:

The palace was no longer a museum, a gallery hung with tapestries and pictures round which the tourist would prowl his indifferent way, but a living entity. Thus the link-boys saw it five hundred years ago, under moonlight and with flares and torches. Horses’ hooves rang on the cobbled stones, mingled with the clink of spurs [notice how the verb tense makes it unclear if Fabbio is talking about the Festival’s recreation of the past or the past itself]. … Behind me lay the present, slick, proficient, uniform, the young the same the globe over, mass-produced like eggs; and before me stood the past, that sinister and unknown world of poison and rapine, of power and beauty, luxury and filth, when a painting could be carried through the streets and worshipped by the rich and by the rabble alike; when God was feared; when men and women sickened of the plague and died like dogs.

The present feels impoverished, provisional, identikit; the past offers excitement and allure. But this vision is a dangerous fantasy, as the passage also indicates (with luxury comes filth; disease carries people away mercilessly—how much more like our present day does this description seem than like the 1960s Fabbio begins by despairing over). Du Maurier would develop this idea—that the pull of the past is dangerous—even more compellingly in The House on the Strand. But the theme can be seen in much of her work.

It is ironic that Du Maurier is known casually as a writer of historical romances, because she is skeptical of both history and romance. I actually don’t know what the deal was with Du Maurier’s own sexuality—I think I read somewhere that she was a closeted bisexual—but her writing is so queer, both in the modern sense of undoing the binary between hetero- and homosexuality and in the everyday sense of being just plain weird. Falcon shares with Strand (and My Cousin Rachel and Rebecca) a distaste for female characters, who want from men not just stability but also sex. That desire takes the chaste/Romantic form of the Rector’s wife; the grasping, malicious, yet indisputably alive form of the lecturer Carla Raspa, as abrasive and sexually dominant as her name; and, worst of all, the slatternly promiscuous way of Fabbio’s mother, who us presented without sympathy (instead of being a woman at the mercy of history and male violence who manages a good life for her child, she is presented, in Fabbio’s vision, as a slut, moving from one conqueror to another), a coldness that extends past the narrator to the text itself. Here’s a typical passage. Fabbio, wandering uninvited through Professor Raspa’s apartment, half ghost, half voyeur, is reminded of his mother:

I went through into the bathroom. Jars and bottles were on the shelves, and a dressing-gown had been flung on a stool. A nightgown, hastily rinsed through, hung limply on a hanger above the bath. The bidet was full of soapy water in which a pile of stockings had been left to soak. The sight made me sick. I went back into the kitchen, retching. The disorder, the intimacy, reminded me of hotel bedrooms long ago, in Frankfurt and other cities, when side by side with my mother’s underwear, similarly washed and rinsed, would be male socks and handkerchiefs, toothbrushes and hair-lotion. Streaky hairs would be lying in the bath. As a boy of eleven or twelve, my stomach had heaved. The stench of lust pursued me across Germany to Turin. It followed me still.

I could imagine someone looking at the scene and thinking of cleanliness and order, or at least the labour needed to provide it. But Fabbio isn’t just scornful—he’s disgusted. In addition to the heaving stomach, look at those descriptions: for some reason, “rinsed through” seems to me more judgmental than mere “rinsed” would be; worse, it hangs “limply.” Female appearance, in Fabbio’s apocalyptic, misogynist vision, has only one purpose: to attract men. “The stench of lust” seem to be his mother’s, not her lovers.

This passage shows female bodies run riot—but the same is true of Fabbio’s own. It is as much—no, more—unruly than the women he disdains. Stepping into the church he was taken to as a child, he experiences “an intense awareness of being small and hemmed in by adults” that always provoked “a desire to urinate.” Later, when he glimpses a naked man who has been the victim of a student prank, he immediately runs “behind one of the newly-planted municipal trees and vomited.”

Moments like these suggest that Du Maurier is more J. G. Ballard than Winston Graham. This is now the eighth of her books I’ve read, about half of them in other words, and I’m enjoying seeing how even a minor work like The Flight of the Falcon fits into the larger picture. If you’ve never read Du Maurier before, this isn’t the place to start, but those already familiar with her enticing, disquieting vision should give it a try. 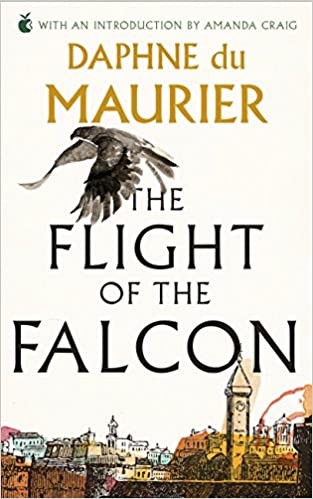 I read Flight of the Falcon for Ali’s Daphne Du Maurier Reading Week (see the list of posts here; see especially her take on Falcon). Like last year, I didn’t finish in time, but maybe if she hosts again I can get my act together.