A lot happens in Nick Drnaso’s Sabrina. A woman named Sabrina disappears; her distraught boyfriend, Teddy, goes to stay with his best friend from high school, Calvin, who now works with computers for the military; the woman’s sister, Sandra, struggles with her grief; a cat goes missing. But we rarely see these events directly. We see instead their after-effects, which, given the extremity of the events (the most drastic of which I am eliding here so that it stays a surprise), are traumatizing. Most often, those responses take the form of an almost wordless sinking into the anesthetizing commonplaces of middle American life. Characters sit in silence—whether they’re alone or not—watching tv, playing video games, wasting time online.

Here are some examples of what I mean:

The style of Sabrina is at odds with Calvin’s young daughter’s favourite book. (She’s in Florida with her mother as the couple experiments with a trial separation, but she’s left a lot of toys behind in the bedroom Teddy uses.) Its pages overflowing with hectic, garish drawings, the children’s book is nothing like the one we’re reading. After all, it has a key: each page lists the names of the items young readers are meant to find in its pictures. Perhaps that promise of fixed meaning is why Teddy is so drawn to it. 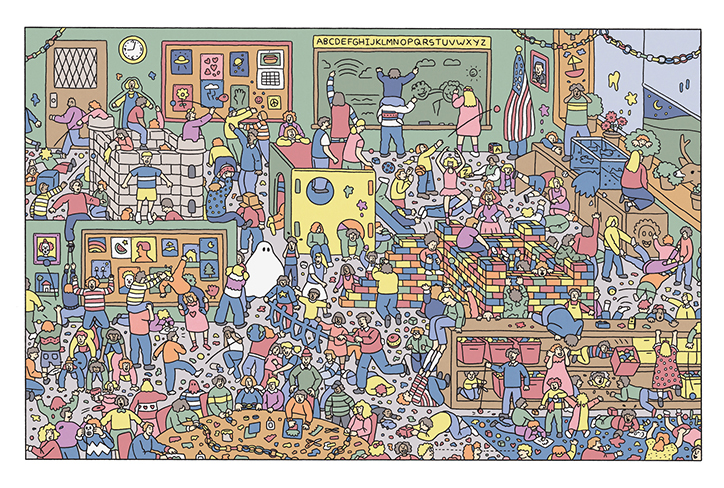 Sabrina, by contrast, feels empty. It would be easy to turn this observation into judgment, to say something like: Sabrina is about a hopeless, denuded world, “the indigenous American berserk” as a form of numbing. Or: its characters are lost, helpless, incapable of self-reflection.

But talking about the book this way—as I find myself inclined to do—is wrong. I suspect most interpretations of the book will take the form of sociological diagnoses (what is wrong with America?). Sabrina connives with this way of thinking, because of the apparent affectlessness of its presentation, and its lack of interest in interiority or psychology. (In this sense, its totemic object is the psychological evaluation form Calvin and his co-workers are required to fill out at the beginning of each shift: What is your stress level, on a scale of one to five? How many units of alcohol did you consume last night? And at the bottom, three questions about whether you want to talk to anyone about anything, questions it is clear the answer to which should always be no.) But if Sabrina leads us to read in certain ways, that isn’t because it necessarily agrees with those ways, but because it wants us to ask why we read that way.

Every text is about interpretation in some way, but Sabrina foregrounds interpretation more than most. Which might seem funny because its characters say and do so little. (What’s to interpret, you might ask.) But the emptiness I mentioned earlier has an unexpected effect. Not that we need to ignore or undo it by unduly filling it but that we have to slow down, look closely, think about this only apparent blankness. Drnaso’s emptiness is a spur to thinking, not a convenient way to shut thinking down (as would be the case if we were to dismiss these people, this world). I’m reminded of Caché, Michael Haneke’s film about surveillance, and the way it makes viewers into paranoid readers, alert to the possibility that every quotidian scene could be sinister, every seemingly empty or boring frame of surveillance video could reveal significant horror. Not that Sabrina incites paranoia, but, like Caché, it turns the very way we look at (and therefore consume) it into the thing we most need to pay attention to, instead of, as we do too often, ignoring it as simply a neutral vehicle for receiving its themes.

On Twitter, Tony from Messenger’s Booker said he was uncertain about the book. He noted how hard it was to tell characters from one another, especially early on, and I certainly agree. In fact, at first, I often wasn’t sure if many of the characters were men or women. This uncertainty bothered me. But why? What was I doing in wanting distinctions when the book apparently didn’t? For whatever reason, I found this uncertainty more of a barrier than the book’s complete lack of exposition. You only find out important information—who characters are, how they know each other, where they live, what’s happened to them—retrospectively, or sometimes not at all. And the only suspenseful sequence—a lovely bit in which Teddy finally leaves his Calvin’s house in search of that missing cat; wandering the empty suburban roads he’s eventually given a lift by a guy in a truck—resolves benignly: we expect Truck Guy to take Teddy out to some deserted stretch of highway and murder him, but, nope, he just drives him right to the Humane Society. No cat there, though.

Drasno’s way of organizing his pages is similarly unsettling. He alternates between smaller, regular shaped panels and larger ones that are two or sometimes more rows high. When that happens, do we read the top row, then the second row, and finally the big panel? Or do we read the big panel in between the first and second rows? It’s not always easy to tell. 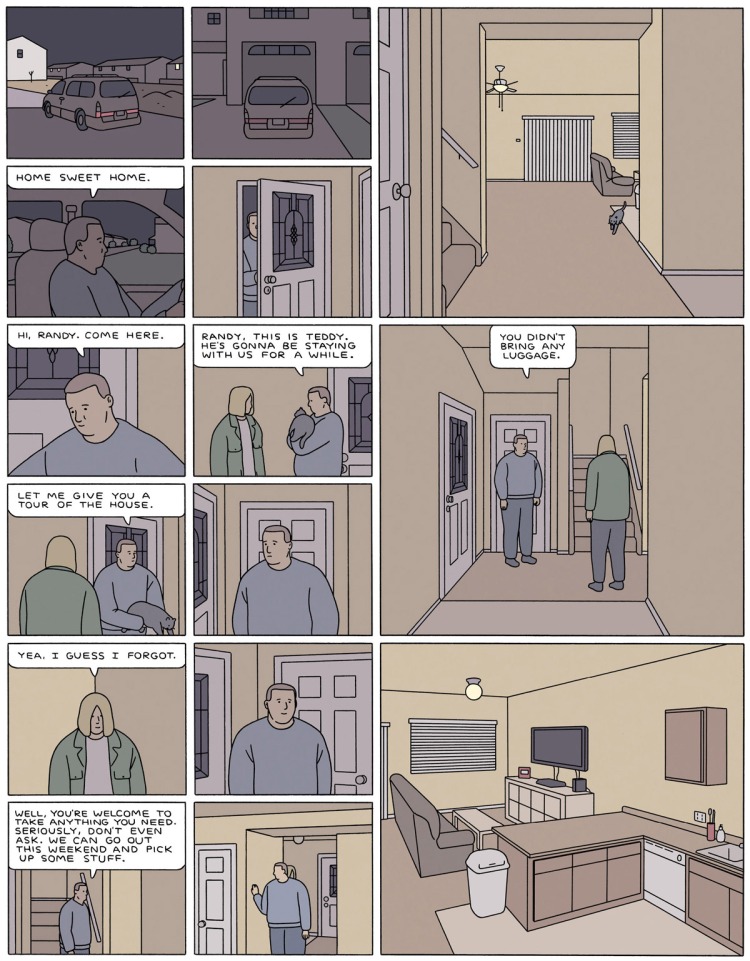 That I took these narrative and visual ellipses and involutions in stride but was bothered that I couldn’t distinguish characters surely says something about me as a reader: I have plenty of experience with narrative experimentation, after all, but my resistance to corporeal uncertainty apparently runs deeper. Yet in the end neither of these modes of uncertainties matters much in themselves. They are just two possible examples of something much more important: the book’s ability to disquiet readers.

But more than unsettled or disquieted, Sabrina made me very, very sad. Even the final pages, which (assuming they aren’t a fantasy—always a possibility) suggest something like fulfillment for one of the characters, didn’t change my mood. At first, I responded to this sadness by explaining it away. I don’t need to be so sad, I said to myself, because life isn’t as hopeless as this book suggests. Most people, I insisted, aren’t quite this unable to communicate, aren’t quite this isolated, aren’t quite this close to the brink of absolute desperation. (Most people aren’t quite this traumatized, either, we might also like to think.) But I realized that this was a lousy response. A better way was to be true to my feelings. The most accurate response to contemporary reality, the philosopher Theodor Adorno once wrote, is to acknowledge all the anxiety, all the sadness, our culture legitimately incites.

Besides, exaggerated or not, the book speaks truth. I felt this most strongly in its depiction of the relationship between anonymity and communication. Connection is routinely sterile, oblique, and failed; instead we are offered the echo-chamber of talk radio, the violence of online forums, the broken sentences of people under duress. When Sabrina’s fate is revealed, Calvin and Teddy are faced with virulent, cruel, hateful responses that I might have found unbelievable were I not on Twitter every other minute.

I wonder what J. G. Ballard would have made of this book. Surely, he would have recognized its landscape of empty spaces: office corridors, housing tracts, rest-stop fast-food joints. But he would have admired, even thrilled to see those anonymous non-spaces put at the center of such a powerful work. Drnaso is more circumspect. He’s not critiquing this homogeneous world, nor the people who live in it. But neither is he championing it as unsung or transformative. Even when Calvin takes a new job, packs up his life, stops on his way out of town to visit Teddy at his own new job, and hits the road (cue more rest stops, more empty restaurants, more generic motels), it’s hard to see these developments as new beginnings. 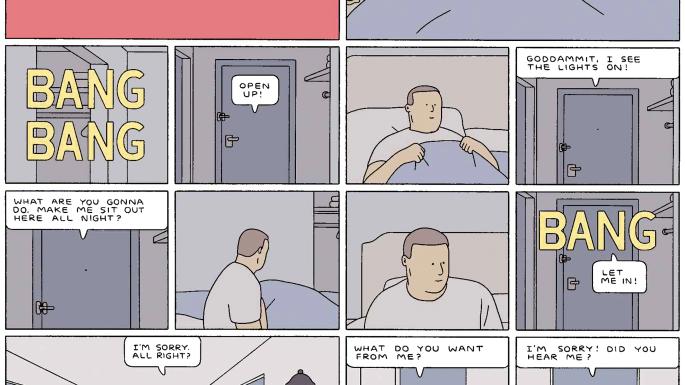 On every page, the narrative and visual point of view of Sabrina is strikingly neutral. Perhaps the very form of comics allows this to be so. We can see things that the characters cannot; we can see things from a point of view that can more properly be called omniscient than anything in ordinary fiction. Take Calvin’s cross-country journey. In his hotel he is awoken by someone banging at the door. He stays in bed, but in the following panels we see what he can’t (though presumably he hears at least some of it): a man at first apologizing and then turning belligerent when his apology isn’t rewarded. Then we see the man’s partner calling to him from down the hall. The man—maybe he’s drunk, or just drunk on anger and self-righteousness—has the wrong room, is banging on the wrong door. The woman shuts the door in his face, and we’re left with a panel of the man in an empty corridor, standing to the side of the frame, as so often in this book. “Hey, let me in!” he shouts. No response. Good for the woman, we think. But isn’t she running a risk? Will she be okay? This resistance to the man’s violence feels dangerous in a book where violence comes so often to the surface. What does the book want us to think here? Is it critiquing Calvin for huddling in his room? Or the man for being a shit? Is it valuing the brave woman? Can anything change when people can’t talk to each other? Is talking so great anyway? Couldn’t that just be another ruse for the violent to get their way? It’s hard not to read a scene in which we are grateful that loud BANGs come only from a fist on a door and not a gun to the head as anything other than a critique of America today. But maybe the real lesson of this beautiful and disturbing book is that any diagnosis of contemporary America’s ills is just part of the problem.