His lists are strictly accumulative. They aren’t for qualifications, hesitations, or refinements. They are always about saying more: a fitting rhetorical technique for this epic work.

Sometimes the lists in Life and Fate are as minimal as can be. One of the most straightforward is in a discussion of Russian literature. Viktor’s colleague Sokolov extols Chekhov’s virtues, especially “the mass of different people” he brought “into the consciousness of society”:

This is the zero-degree literary list: pure inventory. It could be a shopping list. But for me it’s still thrilling. Grossman doesn’t offer quite this many kinds of people in Life and Fate but not for lack of interest. (Grossman, who was a war reporter during the period he writes about in this novel—today we would say he was embedded with the troops—was famously good at getting people to open up, probably because he really was interested in what they had to say.). The difference is that his Russia is more impoverished than Chekhov’s. Maybe not materially, though that’s difficult to say, but perhaps spiritually. That’s not really the word I want: what I mean is that the war has reduced life’s possibilities. Of course, it’s made some things possible that weren’t before (movement and mixing of people, the rise and fall of various characters’ fortunes, etc) but in terms of professions or occupations or walks of life, most people have been subsumed by the war effort.

At any rate, I think Grossman uses his lists in two ways.

The first is to indicate scope, specifically how big, overwhelming, or extensive something is. The Chekhov example is of this kind, but mostly when Grossman uses lists in this first sense he’s doing so to convey the enormity of Soviet history.

Here are 3 examples. The first comes from a scene with Major Yershov, a captured officer interned in a German concentration camp. Yershov is remembering what his father told him about what happened when he and the rest of the family (Yershov himself was at military academy) were deported to the Northern Urals in 1930 after having been denounced as kulaks:

[Yershov’s father] described their fifty-day journey, in winter, in a cattle-wagon with a leaking roof; day after day, the dead had travelled on alongside the living. They had continued the journey on foot, the women carrying their children in their arms. Yershov’s mother had been delirious with fever. They had been taken to the middle of the forest where there wasn’t a single hut or dug-out; in the depths of winter they had begun a new life, building camp-fires, making beds out of spruce-branches, melting snow in saucepans, burying their dead…

The parallelism of the final sentence’s list is ambivalent: its ordering and symmetrical properties threaten to domesticate the terror of the historical reality, as if what were being described were a camping trip; yet those same shaping or aestheticizing tendencies are undermined by the sly way Grossman includes “burying the dead” alongside the more mundane chores, as a way to highlight, even amplify, the horror of what the deportees experienced: death was as ordinary as cooking and cleaning.

A second example suggests that lists sometimes serve as an elegant way to give important historical background, by using representative examples of a large-scale event, without resorting to clumsy info-dump. Here’s Viktor thinking back to the purges of 1937:

The daily roll-call of people arrested during the night; people phoning each other up with the news, ‘Anna Andreevna’s husband has fallen ill tonight’; people answering the phone on behalf of a neighbour who had been arrested and saying, ‘He’s gone on a journey, we don’t know when he’ll be back.’ And the stories about the circumstances of those arrests: ‘they came for him just as he was giving his little boy a bath’; ‘they came for him at work… at the theatre… in the middle of the night’; ‘the search lasted forty-eight hours, they turned everything upside down, they even took up the floorboards’; ‘they hardly looked at anything at all, they just leafed through a few books for show.’

Particular examples stand in for general trends. The pathos of those examples (the man giving his child a bath, the books that are desultorily paged through) is also important in highlighting our sense of outrage. But what are we to do with that outrage? It’s unclear Grossman knows, other than to pursue the vitally important task of recording and remembering. Notice how these sentences aren’t really sentences: the list takes the form of evidence, of examples, offered as if only for their own sake.

The third example is similarly fragmented. The apparatchnik Krymov, now imprisoned as a traitor to the cause, thinks back, in stream of consciousness fashion, to some of the things he saw in Stalingrad:

A dead soldier, a note in his gas-mask that he’d written before the attack: ‘I died for the Soviet way of life, leaving behind a wife and six children…’ A member of a tank-crew who had burned to death—he had been quite black, with tufts of hair still clinging to his young head… A people’s army, many millions strong, marching through bogs and forests, firing artillery and machine guns…

The lack of predication to complete this list of extended noun phrases is similar to what we see in the previous example, but here the ambiguity is even stronger. I’m not sure whether this is a criticism of the propaganda and cant of the regime, using its own language of cliché (“many millions strong,” etc) or a hymn to individual sacrifice in the fight against fascism. 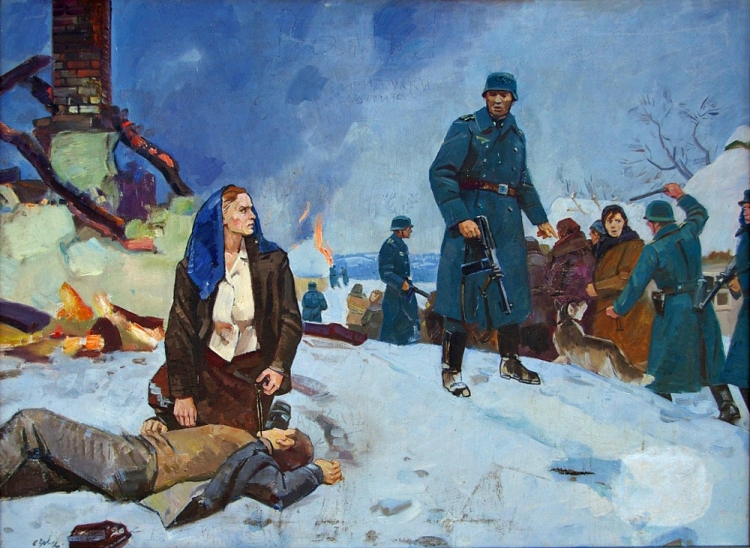 The second way Grossman uses lists is less ambivalent than the first. In fact, the second is a reaction against the first. And we already see it peering out at us from the last example. Against the memorializing function of the lists depicting the scope of history is the second we also find lists that adduce the significance of ordinary individual human lives. I’ll conclude with three examples of this second tendency.

The first is the odd digression imagining “the machine of future ages and millennia.” The narrator wonders whether there is anything such a machine won’t be able to do. “Is there a limit to its perfection? Can it be compared to man [sic]? Will it surpass him?” The enigmatic answer:

We might think the narrator is telling us this because he thinks these are things the machine will never experience. But it turns out the machine will be able to recreate these emotions. And yet the human still wins, because to mimic even one person—“ to reproduce the peculiarities of mind and soul of an average, inconspicuous human being”—the machine would need to be so sophisticated it would be bigger than the earth itself.

The next sentence—“Fascism annihilated tens of millions of people”—suggests Grossman’s real target isn’t AI, but rather the dehumanizing ideologies of his time; his aim is to champion the value of humanity.

When Grossman gets going, when he sets out to name his highest values, it sometimes seems he can only list them. Perhaps it is hard enough—and important enough—simply to name the things politics wants to destroy. I’m reminded of a long section in his essay “The Hell of Trebinka” where he simply lists, at length, half a page or so, the possessions the Jewish arrivals at the extermination camp would have left behind them on the ramp.

The way humanity inheres in people’s relationship to ordinary, domestic objects appears in the second example. Katya Vengrova is a radio-operator sent to a bunker under daily fire from the Germans. She is rightly frightened the enemy will appear through the hole in the ceiling at any moment:

To calm herself down, she tried to picture the list of tenants on the door of her house: ‘Tikhimirov – 1 ring; Dzyga – 2 rings; Cheremushkin – 3 rings; Feinberg – 4 rings; Vengrova – 5 rings; Andryushenko – 6 rings; Pegov – 1 long ring.” She tried to imagine the Feinbergs’ big saucepan standing on the kerosene stove with its plywood cover, Anastasya’s washing tub with its cover made of sacking, the Tikhimirovs’ chipped enamel basin hanging from its piece of string … Now she would make her bed; where the springs were particularly sharp, she would spread out an old torn coat, a scrap of quilt and her mother’s brown shawl.

To the destructiveness of the historical forces of fascism Grossman opposes saucepans, washing tubs, and enamel basins—and the people who are made human by their use of these tools.

Finally, one last example, here are some soldiers drinking vodka and chewing on old bread to celebrate their victory at Stalingrad:

Their heads grew hazy, but somehow the haziness left them clear-headed. The taste of bread, the crunch of onion, the weapons piled beside the mud wall, the Volga, this victory over a powerful enemy, a victory won by the same hands that had stroked the hair of their children, fondled their women, broken bread and rolled tobacco in scraps of newspaper—they experienced all this with extraordinary clarity.

Here Grossman rescues a grammatically clear sentence from what threatens to be another floating list of valued but disparate and not necessarily logically connected objects. Like the example of the man imprisoned in the Lubyanka, this final passage is also hard for me to get a handle on. It’s never easy to avoid kitsch when singing hymns to the idea of humanity, yet Grossman almost always manages to avoid such unearned piety. (It’s one of the things that make this book so impressive.) But here I’m less convinced—this is pretty kitschy stuff (what with the mighty Volga, fondled women, broken bread, etc), and could probably have passed muster as Soviet propaganda.

And yet even though this example is less satisfying than the others, it still shows, even if more problematically, Grossman’s humanism, which is always more powerful the more modestly it’s expressed, as in Katya’s memory of the humble apartment building she grew up in (and, not incidentally, the suggestion of a “multicultural,” for lack of a better term, idea of Soviet life—notice the Jewish family, the Feinbergs, living among the Slavic or “ethnically Russian” ones). This example is problematic because it shows how humanism can be taken up and distorted by political ideologies that don’t care about, in fact actively threaten, the human.

But at their best, Grossman’s lists are a prime technique for generating the warmth, fellow feeling, and menschy-ness that are such central to the novel’s appeal.

Next time, a post on Life and Fate as a Holocaust novel, and then one last post, a special Q & A with a Grossman expert. Stay tuned!