Both of my Swiss grandmothers loved to garden—vegetables more than flowers. They came of age in the 1930s, when thrift, frugality, parsimoniousness, always characteristic Swiss traditions, were especially valuable. Decades later, as a child, I would spend the summer in Switzerland every four years or so. These trips were the most indelible experiences of my life.

After especially busy sessions in the garden, my paternal grandmother (we called her Grossmami) would be almost laid-up with back pain. Nothing could actually incapacitate her: she was always in motion, a doer more than a thinker. She allowed herself the occasional nap, but that was it. Idleness was not for her.

I was never as close to Grossmami as to my maternal grandmother, my Grossmueti, but I loved her: she was sweet and witty and sassy and had gorgeous, opulent hair she was vain about. I inherited the hair and the vanity.

In the summer of 1986, when I was 14, my sister and I spent a month in Switzerland on our own before our parents joined us. We ate a lot of vegetables from the garden: lettuce, tomatoes, rutabagas (gross) and green beans, so many green beans. (In retrospect, I wonder how much radiation we consumed with them—the Chernobyl disaster had happened only a few months earlier.)

Once, when Grossmami came in from the garden, hands on her back, bent forward, I asked how she had hurt herself. She spoke no English, really; my Swiss German was good but hardly perfect. She told me she had a Hexenschuss. I did not know this word, it seemed strange and ominous. Something about a witch?

I mean, I was not totally crazy. Eine Hexe is a witch. Ein Schuss is a shot. A shot from a witch? A witchy shot? Surely not. She tried to explain: it came from bending over in the garden too long, it happened when you got older, it hurt, it went away in a day or two. It was no fun but it was no big deal.

The next time I was at my maternal grandmother’s (the grandmothers lived about 20 minutes apart) I looked in a German-English dictionary. Grossmueti spoke only a little more English than Grossmami, but hers was a house of books.

The few books owned by my paternal grandparents were clearly for show, unwanted sediment from some long-forgotten Book of the Month Club-type membership. I still remember a gilt-backed Crime and Punishment, a book I’m sure they never read but that I knew I would. (Even then I was good at using the thought of reading something—as opposed to actually reading it—to mark the person I wanted to be.) My maternal grandmother, by contrast, had lots of books. They were mostly my grandfather’s, a Marxist machinist who loved Charlie Chaplin but who never seemed funny to me, on the contrary, he was stern and unsmiling and had always scared me (he died of a heart infection when I was ten). Some of the books were her own, mostly about women in religion; in her quiet way she was a feminist, it seemed to me to fit with her quiet dignity (she was very tall, especially for a woman of that time, that might have contributed to my sense—when I think of her I see her on her bicycle, she took it everywhere and never learned to drive). Even as kid it was clear how different Grossmueti’s house was from Grossmami’s. Grossmueti lived in a town, Grossmami in the country. Grossmueti’s kitchen had no need of flypaper. Her living room had no television. Television was a big deal at Grossmami’s, although this was back when there were no programs during the day. All of these things made their houses seem totally different to me. What I might say now is that although my father’s parents were richer, my mother’s parents had more cultural capital.

Which takes me back to the dictionary. Ein Hexenschuss, I read, was “lumbago.” (The dictionary was clearly British.) That didn’t help. I knew the word from Agatha Christie mysteries, where people, mostly curates, sometimes suffered from it, but I didn’t know what it meant. It always sounded vaguely like a dance, though I knew that couldn’t be right. Hexenschuss, the word as inscrutable as my grandmother’s pain, remained one of those cross-cultural mysteries, those gaps in communication that made me feel more helpless and childish than I was, and that always left a gap between me and my relatives. It was frustrating to be a bookish child, in love with language, yet unable to communicate to family with ease and nuance.

Flash forward thirty-five years and now I know that the pinching feeling I get when I vacuum is lumbago. Every week, as I push the bloody thing around in a losing battle against the dog hair that coats the house, the word runs through my head (Hexenschuss, Hexenschuss, Hexenschuss) and I think of my grandmother Madeleine Stuber, née Muriset, who was from a town known in German as Biel and French as Bienne (like the writer Robert Walser whom I almost wrote my dissertation on) and whose first language was French and who was as elegant as people in that part of rural Switzerland got, and who would have surely been happier with another husband but who, I think, had a good life, certainly a long one, and might in fact even still be alive had she not elected in 2015 to take up her right, under Swiss law, to end her life.

She was in her mid 90s then, depressed and ground down by age but still mentally and mostly physically together. She shuffled a bit, worried about falling. She was probably developing Parkinson’s. Her decision to kill herself through physician-assisted suicide did not go over well with her children, my father and my aunts. (No one ever knew what my uncle was thinking.)

I’m reminded now that hexen means to do witchcraft, to perform black magic, to do ill—this is where the English word “hex” comes from. Our word “hag” has the same origins; eine Hexe is also a pejorative for a woman, a minx, a hussy, at least it used to be, the term might be old-fashioned and definitely should be retired. Madeleine was not a minx, though it’s the kind of thing people in my father’s family might say: the Stubers were into snappy retorts and teasing, all very funny, but with an undercurrent of meanness, as teasing always carries. So Hexe is also a curse, which is probably the primary referent in Hexenschuss—that pain makes you feel cursed all right. I feel sad about the end of my grandmother’s life, but not angry. I don’t think her life was curses, or her suicide a curse on her descendants. No crime, no punishment. 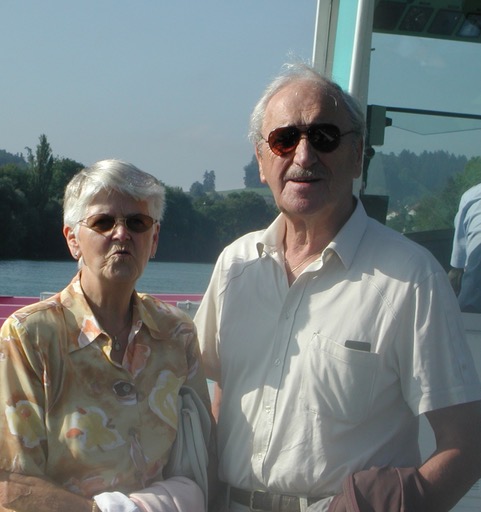 My grandmother Madeleine with my grandfather Paul

Instead I think that at least I spend an hour or so thinking about her each week. As I busy myself with the vacuum, taking grim satisfaction in making order from mess—I’m a little grossed out by dirt, gardening has never been my thing, the vacuum is my rake, my hoe, the rug and the floorboards my garden—I feel the pinch in my lower back and think about Madeleine, who knew I was different from her and everyone else on that side of the family, but didn’t mind, wasn’t made insecure by that difference, never forced her gangly, awkward grandson into the garden, left him to his books. Takes my mind off the pain of the lumbago.

22 thoughts on “On Lumbago”