“Ah, yes, you’re the fellow who wrote a book,” a customer tells Primo Levi in The Periodic Table, Levi’s third memoir, a book about his first career, chemistry. Levi stifles his annoyance at this comment under his professional exterior in a way that reminds us that Levi, too, sees his career as a writer as secondary, a historical accident that sometimes either interferes with or assists his professional endeavours. Despite these occasional self-deprecatory references, The Periodic Table invites us to see connections between his two “careers,” both of which require careful observation and an inquiring mind that is willing to revise its initial hypotheses about the world. 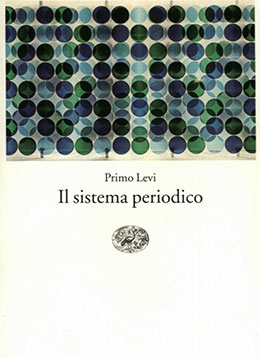 Of course, the book being referred to is his first memoir, Se questo è un uomo, notoriously translated in the U.S. as Survival in Auschwitz, but literally If this is a Man. Levi notes that if it had not been for his deportation to Auschwitz, he may never have become a writer in the first place, but the book’s careful descriptions, thoughtful analyses and avoidance of simplistic explanations or judgments anticipate a long writing career that would only gradually start to supplant his life as a chemist. The title of this first book, in fact, provides an appropriate orientation towards The Periodic Table; the question posed by Auschwitz, Levi suggests, is whether its victims (or its perpetrators) have been completely dehumanized, reduced to the level of mere physical matter, or whether something ennobling or redeeming persists in the midst of such horror. In The Periodic Table, this question is taken up in its descriptions of the human attempt to come to terms with the materiality of the world.

In each chapter of The Periodic Table Levi presents this struggle via an anecdote related to one of the elements of the periodic table. The chapters are arranged in a loose chronological order, starting with Argon, the “inert” or “noble” gas used as a metaphor for Levi’s Jewish-Italian ancestors and ending with Carbon, a seemingly whimsical “micro-history” of an atom of carbon. In between, most chapters are autobiographical, describing an incident in the life of Levi, the chemist, although he includes two short stories written in his youth and two brief stories in which Levi does not appear (and which therefore seem to be fictional). In describing these experiences, Levi suggests resonances between the rulebound world of chemical interactions and the less predictable world of human interactions. At the heart of these parallels lies the question of Levi’s earlier book, the question of humanity; are human beings simply physical matter composed of the chemical elements discussed in the book, or something more? And in what might that something more consist?

It is characteristic of Levi that there are no simple answers offered; from the outset of the book, he calls attention to the complexity of the “human condition, since man is a centaur, a tangle of flesh and mind, divine inspiration and dust”. Chemistry itself becomes emblematic of this division, as Levi’s chapters illustrate both the human desire for scientific knowledge, mastery and overcoming of the physical world and the recalcitrance of matter to even the most inspired human stratagems. As an example of the former, the chapter on “Chromium” is structured much like a detective story in which a problem (the production of faulty paint) presents itself and Levi must use his powers of deduction to solve it. In this case, Levi does indeed come up with an ingenious solution, but many other chapters describe dismal failures—explosions, escaped rabbits, chicken shit that refuses to give up its valuable chemicals, to name a few—that remind us of the limits of human science.

While Levi describes his younger self’s attraction to chemistry as idealistic (if confused), the book’s seemingly disconnected chapters illustrate many different perspectives on this science. His initial attraction to chemistry, Levi says, came from a sense “That the nobility of Man, acquired in a hundred centuries of trial and error, lay in making himself the conqueror of matter, and that I had enrolled in chemistry because I wanted to remain faithful to this nobility. That conquering matter is to understand it, and understanding matter is necessary to understanding the universe and ourselves…” And later, in the “Chromium” chapter, he asks: “It is the spirit that dominates matter, is that not so? Was it not this that they had hammered into my head in the Fascist and Gentile liceo? I threw myself into the work with the same intensity that, at not so distant a period, we had attacked a rock wall; and the adversary was still the same, the not-I, the Button-Molder, the hyle: stupid matter, slothfully hostile as human stupidity is hostile, and like it strong because of its obtuse passivity.”

Levi himself points out the fascist undertones of this rhetoric of conquering and domination, which is perhaps softened by his equation of “conquering” with “understanding,” but the book raises the question of whether understanding can take place in a way that does not equate to such a violent metaphor. As his schooling progresses, he changes his position: “Matter was our ally precisely because the Spirit, dear to Fascism, was our enemy; but, having reached the fourth year of Pure Chemistry, I could no longer ignore the fact that chemistry itself, or at least that which we were being administered, did not answer my questions.” Levi criticizes the apparent alliance between the fascist and the scientific spirit, but also holds out hope that science may be thought of in other terms by noting that it is “that which we were being administered” that is harmful, not chemistry in itself. Indeed, Levi’s book presents the sciences as tentative, speculative pursuits, often quixotic in their aims, and alternately satisfying and disappointing.

In fact, one of the dominant threads that can be traced through this book is the idea that chemistry is fundamentally anti-fascist both in its humbling of the human spirit and in its illumination of the disproof the material world offers to fascist rhetoric. He notes that the sciences may be seen as an “antidote to Fascism… because they were clear and distinct and verifiable at every step, and not a tissue of lies and emptiness, like the radio and newspapers”. Chemistry, above all, is not “fake news”; its results will always reveal truth at an elemental level, even if this truth is not the desired result.

But Levi values chemistry for reasons beyond its factuality; in an early passage describing his study of chemistry in fascist Italy, he suggests that the lesson we can learn from chemistry is that the natural world itself resists the simplistic, uniform ideals that fascism stands for: “In order for the wheel to turn, for life to be lived, impurities are needed… Dissension, diversity, the grain of salt and mustard are needed: Fascism does not want them, forbids them, and that’s why you’re not a Fascist; it wants everybody to be the same, and you are not. But immaculate virtue does not exist either, or if it exists it is detestable.” Levi uses chemistry to form a positive metaphor for “impurity”; rather than the Nazi metaphors drawn from the field of biology that compared Jews to a virus or to vermin, he identifies his own otherness with the catalysts in a chemical reaction. In this metaphor, difference and diversity are needed in order to propel progress forward.

Levi (foreground, right) during his study of chemistry at the university in Turin, 1940

From this point of view, then, perhaps it is most useful to see The Periodic Table as the place where Levi’s two careers collide, and produce something original. Levi describes his early, idealistic self as feeling that “Mendeleev’s Periodic Table, which just during those weeks we were laboriously learning to unravel, was poetry, loftier and more solemn than all the poetry we had swallowed down in liceo; and come to think of it, it even rhymed! That if one looked for the bridge, the missing link, between the world of words and the world of things, one did not have to look far: it was there in our Autenrieth [textbook], in our smoke-filled labs, and in our future trade.” Chemistry, like writing, Levi suggests, is the transformation of the material world into a communicable form, a means of making some kind of harmony or understanding out of the raw “world of things”. In The Periodic Table, Levi is both a chemist who writes, as in “Chromium,” and a writer who uses chemistry as a metaphor, as in “Argon,” or to examine minutely the nature of the world, as in “Carbon,” which ends the book on a point that quite literally fuses the fields of chemistry and writing.

Or, as in the case of “Vanadium,” the penultimate chapter, to explore the complex relationships between Levi’s lives as professional chemist and author, and between his present and his past. Levi’s professional activities bring him into contact with a Dr. Müller, whom he confirms that he met in Auschwitz. Levi assesses him with his characteristic clarity of vision: “Neither infamous nor a hero: after filtering off the rhetoric and the lies in good or bad faith there remained a typically gray human specimen, one of the not so few one-eyed men in the kingdom of the blind.” Levi is reluctantly drawn into a personal correspondence while trying to resolve a professional problem, and the chapter suggests both the power and the limitations of writing as a means of making human connections and resolving the issues of the past. As with chemistry, so with human relations; imperfections and failed connections are an inherent part of the process.

Levi suggests towards the end of the book that “matter is matter, neither noble nor vile, infinitely transformable, and its proximate origin is of no importance whatever.” This is what much of the book, and especially the final chapter on “Carbon” seems to suggest; the power of the chemist, like that of the writer, is to transform things, change them from one state to another without ascribing to them a single stable value. This, perhaps, is the great skill exhibited by Levi in both his careers: the power to transform matter into meaning without the hubris of claiming to have ever spoken the final word.